I was thinking about the issue of trust—it’s nature, the breaking of it, and the rebuilding of it—the other day.  The occasion was likely my daily listening to the morning news.  It’s amazing how each presidential election season we see such horrible things occur on the national stage, and then there comes that moment when the supreme leader of the moment on a stage somewhere says, “And now we must all come together and ignore everything that has gone before.  Bygones must be bygones, for we must unite against the new enemy.”  And, depending on where we are in the process, that new enemy is the other candidate from the other state, the other candidate from the other party, or the other party itself.  So much otherness.

And, clearly, this doesn’t really work.  We have come to distrust our leaders more and more, and they who represent us find it harder and harder to work together on our behalf to get things done that must be done.  Perhaps this is true because of so many predictable cycles of trust breaking.  Perhaps because the violations, personal and political, public and private, have become so many that they accrete as a sort of armor through which trust building is difficult, if not impossible.

Because of my years as a mediator and my years working in various capacities in software development with teams and with managers and executives, I think about trust building and trust breaking a lot.  It’s amazing to me how successful some kinds of trust rebuilding have been in horrific situations, such as generations of apartheid in South Africa or between couples where one has broken the fidelity of the partnership.  The key issue seems to be the notion of reparation, which requires acknowledgement of what broke trust in the first place.

Some years ago I spent a fair amount of time studying the notion of apology.  We say “sorry” any number of times on a daily basis as we bump into someone at the grocery store or interrupt someone accidentally on a conference call.  But, these are mere social smoothings.  It turns out that “sorry” isn’t a real apology. I have seen the necessity and function of apology in mediations many times.

A true apology is a clear acknowledgement of the offense, an expression of regret for the specific negative impact to the offended party, and a plan for not causing this offense again.  “I’m sorry I called you a fat horse’s ass.  I know that hurt your feelings, and I regret that.  Next time I get really angry, I’m going to ask for a break so I can go cool off.”  Or, “Oh, I’m sorry I stepped on your foot.  That must have hurt.  I’ll take care not to push onto the elevator next time.”

An apology is a form of reparation and can work miracles.  But, if the same or a similar offense occurs again or the pattern of offense continues, future apologies don’t have that healing affect.  This is what it can feel like to a Product Owner when the team continually fails to deliver on their sprint commitment.  This is one reason it is so important to coach teams not to take on more than they can confidently deliver in a sprint.

So, what are the components of trust?  Here’s the slide I use in my conflict, collaboration, and leadership classes. 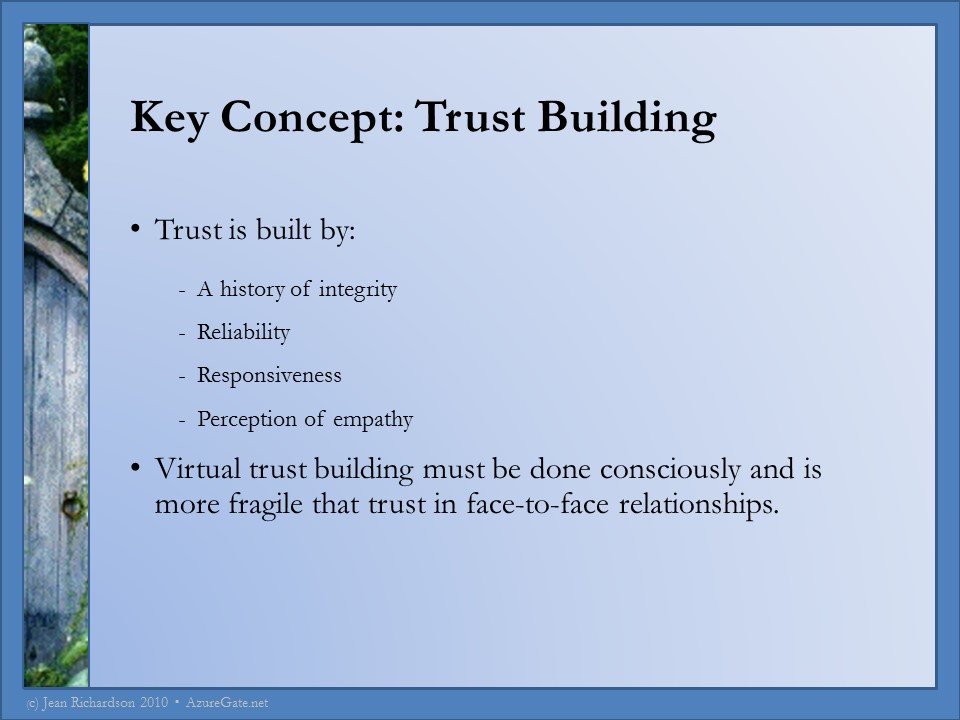 When you look at the standard above, and think about our election process, it’s clear that the “we must all band together” approach has a minimal effect, especially without the necessary real apologies.  It’s true in software development on teams and with stakeholders, as well.

What became interesting to me as I worked with conflict again and again over the years were two things:

Resolving a conflict of significant proportions takes a tremendous amount of skill, as does the rebuilding of trust.  And, when emotions are running high—people are frightened or angry or feel that the trust-breaking behavior is happening right now—it’s even harder to exercise those skills.  If you talk to conflict management professionals, you’ll hear them talk about various populations’ preference for management versus resolution.  Resolution is as difficult as it is valuable.  When we truly resolve one conflict between ourselves it’s almost as if that goodness is contributed to the social capacity account of the entire human system we are involved in.

Conflict resolution not only takes more skill but usually more time than conflict management.  And we are a culture deeply invested in expediency, especially in business.  We can see where that’s gotten us.  Most of us don’t even want to be in our workplaces anymore because of the kind of the cultural context we find there.

When I talk to people about trust building, I tell them to intentionally make small commitments early on—and keep them.  Many people recommend learning people’s names and using them often.  Oddly enough, when someone uses my name frequently in a conversation with me, I feel condescended to.  People are different.  I also recommend asking people how they are—and actually caring to hear the answer.  It’s valuable to explore a person’s network and see how he or she is regarded and if the network is highly compartmentalized or integrated and to be reasonably open with your own.

We sometimes don’t like to acknowledge that trust is an issue for us—that we don’t trust or aren’t trusted.  But, it’s an issue for all of us most of the time.  That’s why we have the social rules we have.  They maintain a trust network.  And, we will all break trust or have our trust broken sometime.  The slide above can provide a useful rubric in determining how that happened and what to do about it.

We're not around right now. But you can send us an email and we'll get back to you, asap.