This morning as I get ready to go to a Mother’s Day brunch with a friend who, also, did not have children, I’m thinking about a conversation at a bed and breakfast on Queen Anne Hill in Seattle a number of years ago.  I was traveling alone and no longer remember why I was in Seattle.  It could be that I was just rewarding myself with a weekend away, some time on the ferries in the gorgeous Puget Sound, and a long luxurious visit to Frye Art Gallery, which seems like a personal friend in many ways it has been in my life so long.

I was just settling in at the small breakfast table among other quiet and gradually waking guests when the co-owner of the establishment swanned up and welcomed me with a hearty “Happy Mother’s Day!”  I remember him clearly, the sort of big, beautiful African American man who makes you want to move toward him to bask in the warmth of his person, the warm glow of his easy smile, and the tenor of his voice.  Startled first by the lack of anything that would indicate I was anyone’s mother, I said “I’m not a mother.”

“We’re all mothers!” he said smiling.

On a planet filled with more than enough children and not near enough parents, the opportunity for nurturing those who need nurturing is ever-present.  And, beyond that, we supposed adults could use a bit of peer nurturing not infrequently.  It’s a thing that needs doing.  Kind friends who came for lunch and stayed to chat for several hours over Easter Sunday were nurturing me.  A colleague who has adopted his three grandchildren and gives one their bottle while we talk on the phone early in the morning and makes sure our calls are scheduled around walking the oldest to her school bus—he is certainly a nurturer.  He is doing what we would have thought only a female person called “a mother” would have done two generations ago.  This morning I read blogs from two different technical practices coaches; I see what they are doing with their audiences as nurturing.

“We’re all mothers!” he said, and he seemed quite clear in the knowledge of his motherhood—nurturance—as he put us all at ease, fed us, looked to our various creature comforts, and saw, to the best of his ability, that we issued into the world that day in the best possible condition.

The act of giving birth ought not be minimized.  But the role of mothering is not limited to those who have given birth.  We can go into the topic of adoption (giver or receiver), surrogacy, and cloning.  This dilutes my point.

When the couple next door had a baby, she was back at work within a few days, and he stayed home for three years, taking time off for the first year or two and now building his career around the baby.  To my mind, he’s doing the mothering.

When I see a colleague sitting with a colleague who is recovering from a disappointment or struggling to integrate a challenging learning experience, the nurturing energy present in the conversation can look a lot like the work a mother does with an adult child.  My sister closest in age to me and I have talked about how we have had, at times, a mutual mothering relationship.

Fathering has changed greatly in the last two generations.  In my neighborhood, I often see men out walking in the summer evenings with infants in their arms or leading a small child by the hand—the evening constitutional.  In the lives of some men, a broader role for fathers has emerged, the nurturing aspect has emerged more strongly as the provider aspect has shifted and is increasingly shared by mothers.

The act of being whole persons and being ourselves is, I often tell younger folks, the hardest thing we will ever try to do.  Nurturance is required, whether that nurturance comes from ourselves and our habits or the caring of others.

Adults can continue to develop, and clearly must, given the state of our world. And, that’s all of us, nurturers and nurtured alike.  My mother used to say to me, “This growing up, no ever told us it would take us all our lives.”

If we had, not Mother’s Day and Father’s Day, but Nurturer’s Day, I wonder what the effect would be.  Perhaps less cognitive dissonance among the many among us who have been tortured, humiliated, or abandoned by their parents.  Perhaps more appreciation for those who have helped us along our path.  Perhaps more appreciation for those who care for those among us toward the end of their earthly path, as my sister does in having our mother live with her and as the nursing home caregivers do for my father.

But, for me, today it’s tea with a friend at our favorite tea house.  We are cerebral.  We will notice the “this day only” quality of the obsequy likely to be present among some of the children toward the mothers they bring to tea.  We both know mothers beleaguered by their children.  She has been a carer for her sister and her father as they each moved through their end of life processes.  Now she supports her husband in his complex grief at his mother’s death.

“We are all mothers!” the big, beautiful, African American bed and breakfast owner said to me as he poured my coffee and orange juice.  And, in that quick moment, he nurtured me and left me with a faceted jewel of wisdom to hold up to the light so I could watch the colors gleam and dance against the wall of my former understanding.

We're not around right now. But you can send us an email and we'll get back to you, asap. 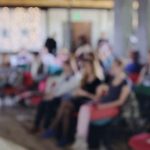